When you think of life in the country, you think of peace and quiet and relaxation.  After all you’re far from the hustle and bustle and noise of the city and all the dangers that come along with it.

My husband and I are originally from the city, to be more specific, Chicago.  My husband is an ex police officer.  He’s been shot and shot at while working.  My car’s passenger side window was shot out while I was driving one night with him in the car.  The bullet missed him by a few inches.  I’ve seen the bullet holes in door frames, bullets that missed him by a few inches.

What does this have to do with country barbecues? Weeell…

Sunday night, I asked my husband to go and put the yummy steaks I had seasoned onto the barbeque.  I followed him outside with a fork and clean plate.  He lifted the lid on the barbeque and we heard a loud SNAP and then the sound of something hitting the deck.  We both thought that something had snapped off the barbeque, but what?  There really wasn’t anything that would break by him lifting the lid.

He put the steaks on the grill and looked down at the shelf on the right near the burner.  There was a big hole.  He then looked down on the deck and picked something up. 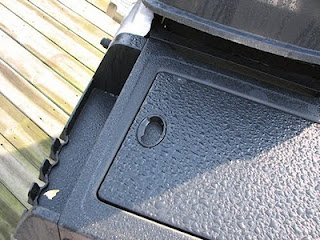 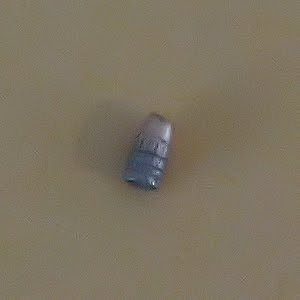 We hadn’t heard the report when the rifle was fired and he worked out a trajectory based on how the bullet hit (police officers lol ) and figured out where it had come from.  We most likely hadn’t heard the shot fired because the bullets can travel up to 2 miles and honestly, we hear alot of shots everyday, as people are always shooting squirrels and other “pests” out here.

So next time you think of life in the country as idyllic, it can be, but it’s filled with more dangers than you’ll ever know.  Remind your friends not to shoot up into the air at nothing, for no reason.  What goes up, must come down.  Make sure you have a target, so you don’t end up hitting someone’s grill 2 miles away.  Sometimes I think these things could only happen to us, because you may as well call us Oliver and Lisa Douglas from the old Green Acres tv show.  I have stories!  I actually am thinking of naming our place Green Acres.

Anyway, in typical police officer and police officer’s wife form, we shrugged off the bullet.  After all, it really hadn’t scared us, as we thought it was something breaking and it turned more into a puzzle than anything else.  Of course I now have a hole in my barbeque, which I’m not thrilled about, but we have a story to tell and I guess that makes for a great conversation starter.

Oh.. the steaks were delicious.  We ate inside.