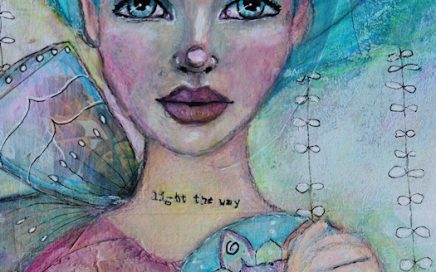 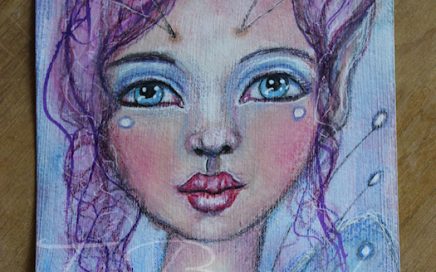 I’m sharing this magical creature I painted yesterday with you,  in hope that she brings a little of the magic she brought to me, into your day.

Hello friends! Yes, I am still here and I am still making art and I am so so happy to see that you are here too! Sending you all some love this afternoon via this sweet, sketchy, little fairy mixed media painting, which was prompted by two words I pulled out of my Word Bowl. […]

Face #2 is finished.  Mixed media including water color, ink, colored pencil, graphite and acrylic. I know I shouldn’t take photos at night, but I wanted to share her with you today.  The true colors are so much nicer (especially the background and the shadow under the nose) and the hair color is much richer. […]

This is yesterday’s painting.  I had wanted to post it last night but the light was too bad to take a picture.  This morning’s light was of course better, but the colors are not true, (despite all my editing attenpts) as the original has more pinkish red through out. Thirty Paintings in 30 Days

So far, so good!  I’m ten for ten! I am, however, a little behind in my 29 Faces, so today’s painting, I knew had to be a face. I used another advertising magnet as my canvas.  As before, I applied a layer of gesso first and then got out my acrylics and painted this cute […]

I love fantasy art and my digital work is full of fairies and elves, so I guess a fairy was bound to make her appearance in my doodle/sketch book sooner or later. She wasn’t a serious sketch.  She was a “just to doodle”, doodle, just for me, while I was watching television.  I started with […]

Once again, I’ve done a quick art piece for Twinkle Twinkle’s Summer of Color 2, Ice Cream Inspirations. This week’s flavor was Mint Chocolate Chip, one of my favorite ice cream flavors. Of course I had to do another fairy using the minty green and chocolaty colors found in our inspiration. I call this Lost […]

I did two quick little art pieces inspired by, and for, Twinkle Twinkle’s Summer of Color 2, Ice Cream Inspirations. This sounded like so much fun, when I stumbled across it, mainly because I LOVE ice cream.  Getting a chance to create art based upon the colors of delicious ice cream flavors was something I […]

A sneak peek at a couple of things I’ve been working on this week. First, September’s Birthstone Fairy, Sapphire.  She is beautiful.  Trust me on this! Working in PSP here.  I also have PS open at all times and switch back and forth between the two as I work. Second, a Crudoodle WIP, sketched and […]