This has been a hot and steamy week weather wise.  I hope if you’re having the same, you’re staying nice and cool.
This week’s Featured artist is

How and why did you become a fantasy artist?
I have always loved fantasy art. As a child I loved fairy tales, and I started to create fantasy at a very young age. My grandmother believed in elves and fairies! She used to tell old folk stories and stories from the Norse Mythology when I was a child. My first fantasy arts were graphite drawings. I became a cartoon animator and started to work as a designer and art director on computer games. In 1999, I had a game titled Rosa And The Magic fairy published in the Denmark. One of the first fantasy artists who inspired me to draw and paint fantasy art was Boris Vallejo. I found an art book featuring his art, when I was on a holiday in Paris in the early 1980th. Later I took some classes in botanical painting at London Art collage, to learn how to paint nature, and my botanical studies inspired me to draw flower fairies.

What medium(s) do you work in?
I like to switch between different mediums. I have worked in graphite, colour pencils, ink, water colour acrylic and oil. I also like to work digital. I will work in mixed mediums if I find that it will improve my painting. At the moment, I am working in acrylic on birch plywood. I start my paintings as detailed graphite sketches and then I transfer my sketch to my panel or canvas. I have a blog about drawing and painting where you can follow my fantasy art projects at www.marianne-mathiasen.com

Your work is so full of fancy and imagination.  Where do you get your inspiration and ideas?
Most of my art are based on ideas I get from nature. I shoot a lot of digital photos, when I walk my dog or travel. I also do a lot of sketches from life that I use in my fantasy art later. When I start a painting I pin a lot of photos and sketches on the wall behind my easel. The photos and sketches helps me to work out the composition and to develop the characters and landscapes.

Some of my photos are turned into digital art, and other photos are used as reference for my art.

Who are your favorite artists and why?
The Dutch illustrator, Rien Poortvliet and James Gurney. Both my favorite artists have created their own fantasy worlds. Rien Poortvliet illustrated the books about gnomes by Wil Huygen. I love how the book tells all about the gnomes’ world. James Gurney’s books about Dinotopia, are so delightful! I enjoy how lifelike he painted the dinosaurs. My two favorite artists both draw and paint in a realistic style. I find it intriguing when fantasy and realism are merged into an imaginative world, so that you can’t help wondering if the fantasy realm might exist for real somewhere.

Out of all the paintings you have done, do you have a favorite?
I did a graphite drawing for the Nidlongdir stories, showing how the fairies grow inside apples. I love this drawing, because it got me started on writing and illustrating my own fantasy realm. 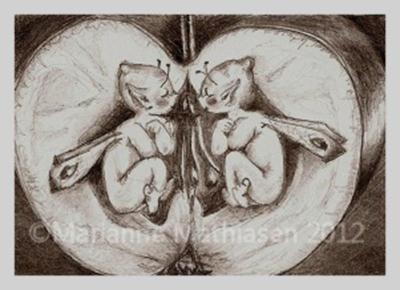 It all started in the summer of 2008, when I was doing some botanical illustrations of apples in my garden. During the summer I had spent many hours under my old apple trees in my garden. Sometimes I had a feeling that I was being watch, and I also found things in the garden that indicated to me, that there were fairies in the neighborhood. My first encounter with the fairies in my garden occurred in the late summer, in the morning. I was drawing on my apple illustration when I saw two fairies resting in the morning sun in the apple tree. Later I learned that it was the fairy queen and king that I had seen.

In the early autumn my daughter found a tiny pair of fairy baby twins inside an apple from our apple trees. At the time she was a student, so she had no time for babies, and therefore I decided to take care of the two small babies myself. I named the twins Selene and Ebbe.

I soon discovered that there was a lot problems taking care of the fairy twins. At the point where I nearly had given up the hope of keeping the tiny babies a fairy left a gift for me while I was asleep. I was given a fairy communicator that made it possible for me to understand what the fairies are saying! During the winter of 2008-2009 I traveled into Nidlongdir by the help of some of the fairies. I was appointed as ambassador of Danagonia. You can visit Nidlongdir yourself if you go to nidlongdir.com

What do you enjoy doing when you are not painting?
I love gardening and sewing. My daughter and I attend The Elf  & Fantasy Fair every year in the Nether Lands. We create new costumes every year, and we spend a lot of time searching for the right materials for the costumes. I love my family; we like to play all sorts of games, like World Of Warcraft or Minecraft. I am also a member of a Viking guild where we celebrate the old Norse Mythology.

Thank you Marianne for taking the time to do this interview.  I’ve enjoyed seeing your art and getting to know you.