Where did your online nickname, Wyld Dandelyon, and the name of your website, Dandelyon’s Worlds come from?

I’ve always loved dandelions.  They first bloom in the early spring when the world needs color and life, and they just don’t give up.  They grow where they want and bloom when they want and survive just fine despite everything.

When I picked a Live Journal name, I was thinking of it as a mostly private journal.  I wanted something fun, but also something that would suit me as a second name, since I know that when you write under a name it does become one of your names, in a truthful, magical sort of way.  I touched on the Dandelyon part of the name; “Wyld” reminds me that if your creative work is too tame, it’s boring.

Once I started writing fiction and poetry in my journal to share with friends and strangers, I redid my home page with an eye to having a bigger audience.  I write in many worlds and I’m Dandelyon, so Dandelyon’s Worlds seemed like a good name—definitely a better journal name than whatever it was before.  In retrospect, it must be much better, since I can’t even remember what the name was before.

I’ve become very fond of the name Wyld Dandelyon; I’m @Wyld_Dandelyon on Twitter, at http://www.nanowrimo.org and a few other places too.

What medium(s) do you work in?

As an artist, I do fabric arts, wood carving, polymer clay sculpting and dabble in other arts when I get the chance, but mostly you’ll find pencil, pen, and acrylics online.  I have made unique hand-made teddy bears (I won an award for a three-eyed bear with antennae called Bearly Alien at one Wiscon art show), but all the glory in the artist bear field goes to people who use real fur or wool, and I have allergies and chemical sensitivity, so acrylic is more friendly for me whether it’s fake fur or paint.

As a writer, I work almost exclusively in pixels on a computer screen—they’re much faster than pen and ink, and easier to recycle.

You are a staff member of a website called Torn World, which is fascinating.  Could you tell us a little about that?

I’d be happy to.  Torn World is a shared science fiction world with fantasy elements, and it’s a very fleshed-out world.  It has aspects I’d never do on my own—for instance, there’s a language, and one of my co-creators gives weekly language lessons over on our Live Journal group blog.  I first got involved when Torn World’s creator and publisher had some world building contests; the entries are now published over at www.tornworld.net in the articles section.

But the world is just the beginning.  We have quite a lot of fiction, poetry, and art—even mythology—including both stand-alone pieces and ongoing serials.  One thing I’m proud of is that Skycat, the trickster I created for the Riilass Swamps, has inspired other people to write fiction, poetry, and even more myths including one of my favorite Torn World poems, Valerie Higgins’ Bathing a Skycat.

Right now I’m working on finishing the story of Jrilii, a girl who is part of a semi-nomadic village of snow-unicorn riders.  The snow-unicorns have a serious inbreeding problem and Jrilii has become aware that they could die out, leaving her people without one of the most important resources they have to survive in the tiny arctic “shard” of the world that they’ve been trapped in since the ancients caused a disaster known as The Upheaval.  I’m also working on several story arcs set in the south, including the story of Dini and Lalya, two men who are deeply in love and want to get married.  Unfortunately, where they live two men can’t get a marriage license, so one of them volunteers to get re-licensed as a woman.

I don’t want to give too much away, but it’s really no secret to our readers that the respected and powerful scientists in the south are venturing into dangerous areas of study.  The world has been healing since The Upheaval, but the characters don’t yet realize that new scientific discoveries threaten that.  Will they realize they are on the brink of triggering a second Upheaval before it’s too late?  After all, they’re distracted by fashion and politics, unicorns and sea monsters, romance and children—in short, all of the things people live and die for.  The hints that something dangerous is going on are there, but the scientists can’t actually see what’s happening, and can only label the various phenomena they can see and measure “anomalies”.

Your illustrations are beautiful.  I especially like the expressive faces of your portraits.  Where do you get your inspiration?

Wow!  Thank you!  Working at Torn World has really caused me to push my skills as an artist, since there’s other artists there who are really much better than I am.  One of my big artistic inspirations is Susan Seddon Boulet, but her faces are always so meditative—I like smiles and other expressions that let a character’s personality shine through.  But I love how she layers images together to make an painting that’s more than the sum of its parts.

Do you illustrate your writings?

Some of my art at Torn World illustrates my own stories.  I also have work there that is illustrated by other Torn World creators—that’s one of the pleasures of working in a shared world.

I find that writing and art takes different mind-sets, or maybe just different skill-sets.  I rarely sit down to say, I’ll do a story and an associated illustration; usually the story comes first and later I go back to the character or the idea and, looking at it from a different perspective, do some art.

You are a very talented writer.

Thank you again!  I know I have a lot to learn, still, but I admit to being very pleased with some of my stories and poems.  As to the rest, well, I heard an interview with a very famous singer once who said he doesn’t listen to his own recordings because he can always hear the defects.  I try to remember being human means being imperfect, do the best I can on each project, and then move on to the next one.

Could you share a poem, a song, or an excerpt of a story with us?

I’d love to.  But which one?  How about a song, since my wee-under-construction website (www.wyld-dandelyon.com) has links to some fiction and poetry:

An Imbolc Tale
By:  Deirdre M. Murphy
Come light a candle to remind us Spring will come
Come share a song, a dance, a rhythm on the drum
I’ll share a story on this frigid winter night,
The tale of a Goddess who would rather work than fight.
Brighid’s Chorus:            I am the fire in the poet’s heart
I am the passion from which all new things start
Whether you shape words or metals,   I am the flame
If you create something new, you invoke my name.
The Gods assembled to see which one was best
They held seven contests to see who could beat the rest
But Brighid stayed home, and stoked her hearth fires hot
With dinner cooking, planning beauty in her thought.
The tricksters told tall tales, none willing to concede
The Gods of weather made rain–more than anyone could need
The Goddesses of beauty preened while Hunters trapped and slew
While Brighid wrote a song, made bread, and set the mead to brew
At last, the war-Gods gave up, bruised and tired and sore
The Gods of sex and those of harvest vied no more
Worn out, the Gods all turned to the Judges with a sigh,
But the Gods of Wisdom fought and declared the games a tie.
Then Brighid rang a bell, new-forged in her hearth fire
The Gods and Goddesses found a feast to soothe their ire
And Brighid sang her song, which praised each one in turn
They cheered her as the best; gave her the winner’s urn.
Copyright ©2000 (April 19) Deirdre M. Murphy.  All Rights Reserved.

Do you have a favorite, out of all the art you’ve done?  Which one and why?

Oh, gosh, that’s a hard question!  There’s a fire horse I painted with fabric paints on a piece of orange fabric that I liked so much I turned it and the rest of the orange fabric into a dress; that was a while ago, but I still like it.  It’s beautiful and vibrant and unusual.

I also remember one teddy bear I made that came out kind of lopsided and pear-shaped; after I went to a gaming con I realized what he’d been up to and bought him some buttons, made him a vest and a dice bag, and bought him a pair of glasses.  He didn’t even make it to the art show at the next con I was going to display him at.  I love him because he shows art doesn’t have to be perfect to be, well, perfect.  Character matters, and once I knew who he was and dressed him properly, he found a human to love!

I’m also very pleased with my most recent character portraits at Torn World because they’re so much better than the portraits I was doing even just a year ago.  Looking at them gives me a wonderful sense of accomplishment.

What do you enjoy doing when you are not painting or writing?

Lots of things!  Music is a big one.  I sing and play autoharp, guitar, and cittern.  At conventions I can usually be found in the filk room until very late at night, either making music or listening.

I love living in the future!  (My cell phone does more than my first ten computers combined, and while it’s deficient as a word processor, it can be used to write in a pinch).  I also enjoy being outdoors, dancing around a campfire, and spending time being silent in a very quiet place.  One of my goals in life is to watch more moonsets and sunrises just before going to bed.  Wish me luck!

Thank you Deirdre, for taking the time to do this interview.  I’ve enjoyed seeing your art and getting to know you.  Please feel free to grab the badge below for your website or blog.   It’s also available on the side bar with the code already done for you. 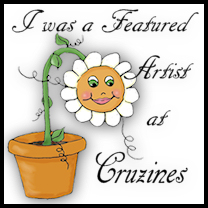