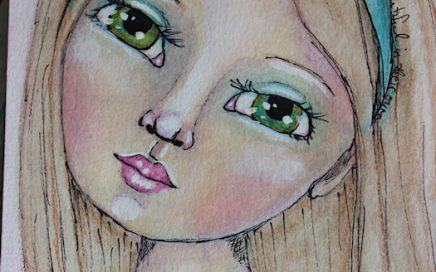 Face #3 – Step by Step Walk Through

Today’s face is called “Everyone is Beautiful”.   As you can see, I wrote those words in her hair.   When I started to sketch her, I decided to grab my camera and photograph some of my steps.  I have some friends who are beginning their face painting and sketching journey, encouraged by 29 Faces. […]

Sneak Peek at New Art – Scout by Tori B.

A sneak peek at new artwork I’m working on. This one’s a little more dynamic and an elf, not a fairy.  She’ll be armed and dangerous. Scout Scout Close Up by Tori Beveridge 2012

I’m working on a few birthstone fairies right now, including June’s Pearl. It looks like November’s Birthstone Fairy, Topaz will be finished first.  I am in love with the sunny yellow that I have picked for her.  It’s not a color that I work with often  I usually work with pink, purples, greens and blues. […]

My Birthstone Fairy series has been sitting on the back seat for months now.  Should I say over a year?  Gah!  I am now on a mission to finish them. This is the fifth time I’ve started an April – Diamond Fairy.  Other attempts were in white, pale blue and pale pink.  They just didn’t […]

If you’re anything like me you have unfinished artwork lying around, either on your hard drive or in your desk, or art studio.  It seems I have ALOT of unfinished work.  I’ve spent the last few days going through it and deciding what I want to trash and what I want to either finish or […]