If you’re anything like me you have unfinished artwork lying around, either on your hard drive or in your desk, or art studio.  It seems I have ALOT of unfinished work.  I’ve spent the last few days going through it and deciding what I want to trash and what I want to either finish or rework.

This old 3D poser render caught my eye.  It’s been sitting around for over a year now.

It was named Valentine Doll and was in .png format.  I had done it to make a Valentine’s Day piece of art.  I decided to work with her, even though Valentine’s Day is long past or a long way away.
I tried a few different backgrounds and elements, sticking with the Valentine theme. 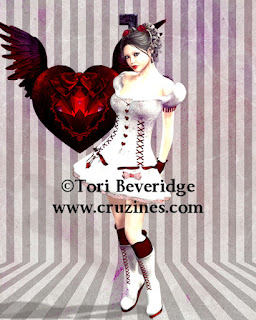 Errrr… no… this isn’t working!
Even if I touched her up, added heels to her boots, I knew I wasn’t going to be happy with her.  For one thing, the lighting I had used in Poser had blown her out.  I understood why she had been sitting unfinished for so long.
I was going to trash her and move on to something else, when I had the idea to use her only from the shoulders up.
The lighting became much easier to manage.  Her red lips and the red roses in her hair became a focal point.
The whole picture took on a much more romantic look. 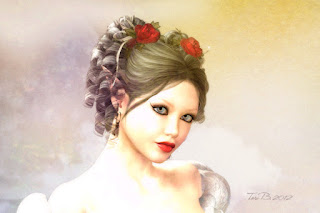 Rose Red by Tori Beveridge
I named her Rose Red, after the fairy tale character, who although not a fairy, might have looked like this if she had been.
You can view a larger version of Rose Red in my gallery .  Prints are available there also.  Other products will be in my Zazzle store soon.